Hyperbaric Oxygen Therapy: What You Need to Know? 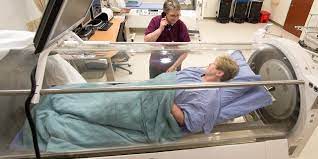 Oxygen is crucial for living, but it also aids in the recovery process after an injury. Not only does it help eliminate infection-causing anaerobic bacteria, but it also helps energize regenerative processes at the cellular level. Oxygen under pressure at high concentrations can help revive a sluggish healing process in the case of chronic or otherwise unhealing wounds.

Treatment with pressures 2-2.5 times that of normal atmospheric pressure (air typically contains around 21% oxygen) is known as hyperbaric oxygen therapy (HBOT). As well as helping with wound healing, this therapy has been utilized to treat carbon monoxide poisoning and decompression sickness. Even the most severely damaged wounds can eventually benefit from hyperbaric oxygen therapy Baton Rouge.

Some Information You Should Have Before Beginning Therapy

Before beginning treatment in a hyperbaric oxygen chamber, it is important to be familiar with the following five facts.

Your treatment can be postponed if you have cold or other diseases such as high blood pressure, frequent loose stools, fever, or any flu-like symptoms. A patient’s cold could limit their capacity to empty their ears, leading to inner ear injuries.

Some drugs may have different results when exposed to oxygen. A few medications should not be taken during therapy, including several chemotherapies, a wound ointment, and a prescription that prevents alcohol intake in patients with a history of alcohol dependence. If you’re taking any medications, you must talk to your doctor and health care professionals ahead of time.

Sessions in a hyperbaric oxygen chamber typically occur once daily, five days a week, and run for over two hours. Your treatment plan may require 30 or more sessions, depending on your doctor’s recommendations. The number of treatments you receive is usually determined by how rapidly your disease improves. The duration of the treatment itself is around 110 minutes, including two 10-minute breaks from breathing oxygen. The remaining time is reserved for the ascent and descent.

Flying metaphors have been used to describe some patients’ initial stages of this treatment. Your ears may pop from the increased pressure inside the chamber. Clinics follow measures to ensure that patients don’t experience ear pain or fluid buildup due to their therapy.

Feeling weary following treatment is common, as is experiencing pain in the ears or sinuses or a sensation of fluid building up in the ears. Enclosed in the chamber may cause anxiety for those suffering from claustrophobia. Although adverse effects such as vision abnormalities and numb fingers are possible, they typically improve as treatment progresses. Some people report feeling lightheaded or even giddy due to the increased pressure and the inhalation of 100% oxygen. It may also hasten the development of cataracts and cause convulsions in extremely rare circumstances.

Patients with emphysema or another lung illness in which air becomes trapped in small blebs and bursts with pressure changes are the only ones at risk of experiencing a collapsed lung. Although uncommon adverse events can occur, it is required by law that a qualified medical practitioner be on-site for the duration of your treatment.

The Benefits Of Hyperbaric Oxygen Therapy

During hyperbaric oxygen therapy Baton Rouge, the surrounding air is replaced by 100% pure oxygen. This improves circulation, which carries oxygen and nutrient-rich blood to the overworked and inflamed tissues. Patients with severe inflammation and swelling, especially in the limbs, have significantly improved with HBOT.

Your body’s immunological response can be boosted by the high-oxygen atmosphere of a hyperbaric oxygen therapy chamber. Scientific studies have revealed that hyperbaric oxygen therapy Baton Rouge can alleviate autoimmune symptoms, including erythema and lymphadenopathy. People with autoimmune diseases or compromised immune systems may benefit significantly from HBOT.

Around 40% of the population will be affected by cancer in their lifetimes. Radiation or chemotherapy are often used to treat cancer. Treatment with HBOT shows promise in slowing the progression of some cancers. As a bonus, hyperbaric oxygen therapy (HBOT) may reduce your vulnerability to radiation therapy’s adverse effects and speed up your recovery from chemotherapy.

Unfortunately, neuropathy, or chronic nerve pain, affects a large population. Individuals with carpal tunnel syndrome, diabetes, vitamin deficiencies, and poor circulation are also at increased risk. Hyperbaric oxygen therapy Baton Rouge can alleviate some of the associated symptoms as the body heals from neuropathy. In patients with diabetic neuropathy, HBOT has been shown to enhance results. Sometimes patients even have peripheral nerve regeneration.

When a person’s immune system is compromised, even seemingly minor injuries like an open wound can quickly become life-threatening. HBOT treatments can offer the extra oxygen your body needs to restore itself.

We guarantee that you will enjoy the rejuvenating effects of hyperbaric oxygen therapy at Meta Glow. Schedule your first HBOT treatment at our Baton Rouge clinic by calling 225-767-0646 or messaging us online today.